•From the mid-1960s on, John Wayne used this revolver in movie classics such as Chisum, Big Jake, Rooster Cogburn, & his Oscar-winning performance in True Grit

Arguably the most recognizable sixgun in western movie history, Cimarron Fire Arms went to great lengths to reproduce John Wayne’s famous sidearm, used in so many of his trial dust sagas. Copied in every detail from Duke’s own Colt, this ain’t no gussied up six-shooter wearing a fancy finish, with engraving and pictures plastered all over it, rather it boasts of a trail worn, plain finish, with the bluing worn completely off, just like the gun JW packed when taming the silver screen. It even sports the authentically reproduced, aged-looking yellowed grips with the finger grooves! Made by Uberti in .45 Colt caliber, this 4 3/4-inch barreled single action is an exact twin to Big John’s original motion picture shooting iron. From the mid-1960s on, our hero packed a gun like this in nearly every one of his great westerns, including such classics as Chisum, Big Jake, Rooster Cogburn, and his Oscar-winning performance in True Grit. As Duke might say, “This just suits your pistol!”Type : RevolverAction : SingleCaliber : 45 Colt (LC)Barrel Length : 4.75″Grips : Orange Finger GroovedSights : Wide Front sightsWeight : 2.48 lbsFrame Description : Original Finish 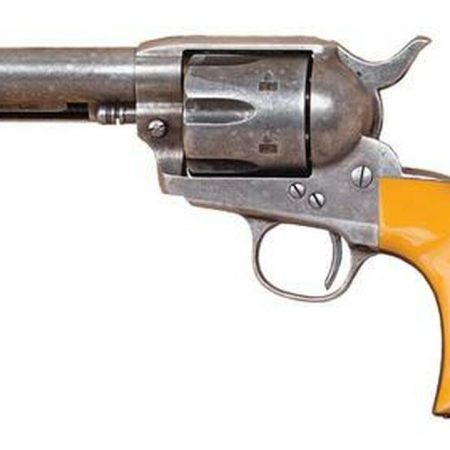