Designed by Major General George Schofield, the Smith and Wesson Model 1870 “Schofield” was a revolutionary design that broke open, ejecting all six spent cartridge cases automatically while providing easy access for re-loading. Fast re-loading being a distinct advantage in his line of work, Jessie James bought a pair as did John Wessley Hardin and Wild Bill Hickok.

Although the U.S. Army purchased 3,000 S&W Schofields with an improved top latch for cavalry troops, it was the Russian government that really embraced the new sidearm. With a slightly modified grip, lanyard ring and distinctive trigger-guard spur, the Czar ordered over 41,000 of the new S&W revolvers.

True to the originals, Uberti Top Breaks come in all three models including the Russian model with authentic Cyrillic barrel stampings.

Modifications were later made in the form of a rounded and knurled latch to give more grip when opening the frame. This improved model was designated the No. 3, 2nd Model Top Break, below. 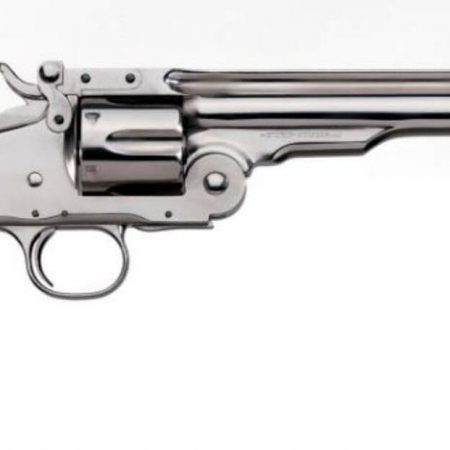